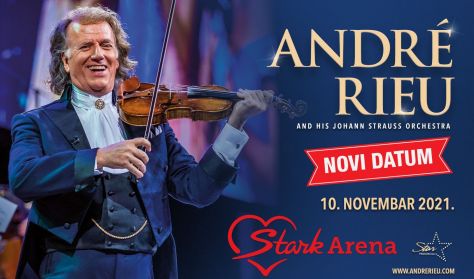 André Rieu, the Dutch “King of Waltz”, who has made classical music accessible to all, will bring his Johann Strauss Orchestra back to Belgrade as part of his world tour in November 2020.  more

André Rieu, the Dutch “King of Waltz”, who has made classical music accessible to all, will bring his Johann Strauss Orchestra back to Belgrade as part of his world tour in November 2020.

Dubbed the Maestro of the Masses (New York Times) this year, Serbian audiences can look forward to a completely new program, fantastic melodies from film, musical, opera and operetta as well as traditional music and of course they are invited to waltz the night away in an unforgettable evening of music and dance.

André Rieu says: „My orchestra and I are so excited to return to Belgrade this year during our world tour 2020. Our last visit in 2019 was truly unforgettable and very emotional. The Serbian audience is so enthusiastic, passionate and warm-hearted. It will be wonderful to come back to your country in November to celebrate love, life and of course: music.

André Rieu went on to build an empire out of a worldwide classical music touring act. He firmly believes that classical music is made for everybody to enjoy. At his concerts you will find the audience laughing, weeping, singing and dancing in the aisles. His impeccable way of captivating his audience from start to finish, and making classical music fun and contemporary, has made him one of the greatest entertainers of our time. 2019 was André Rieu’s most successful year in his career, with more than 700,000 tickets sold worldwide. His concerts are about much more than the music. Beautiful gowns, vast screens behind the orchestra, many international soloists, romantic lights and lots of humor make André Rieu’s concerts the perfect entertainment for the whole family.

Rieu has sold more than 40 million CDs and DVDs – his new album being “Happy Days”. He has reached 30 number 1 chart positions and over 500 platinum awards. His YouTube videos reached far over a billion views so far and 5 million subscribers follow him on Facebook.

André Rieu who celebrated his 70th birthday on 1st October 2019, has been married for over 40 years and lives with his wife Marjorie in a romantic castle from 1452 in his hometown Maastricht in the Netherlands. The couple has two sons and five grandchildren.

Tickets for this spectacle to be held on 25 November 2020 in Belgrade's Štark arena, with the beginning of 8 pm, will be on the sale as of 13. March, and you can provide them at www.tickets.rs and in all Ticket Vision retail stores.